Home / Blog / A tale of two bridges: Part One 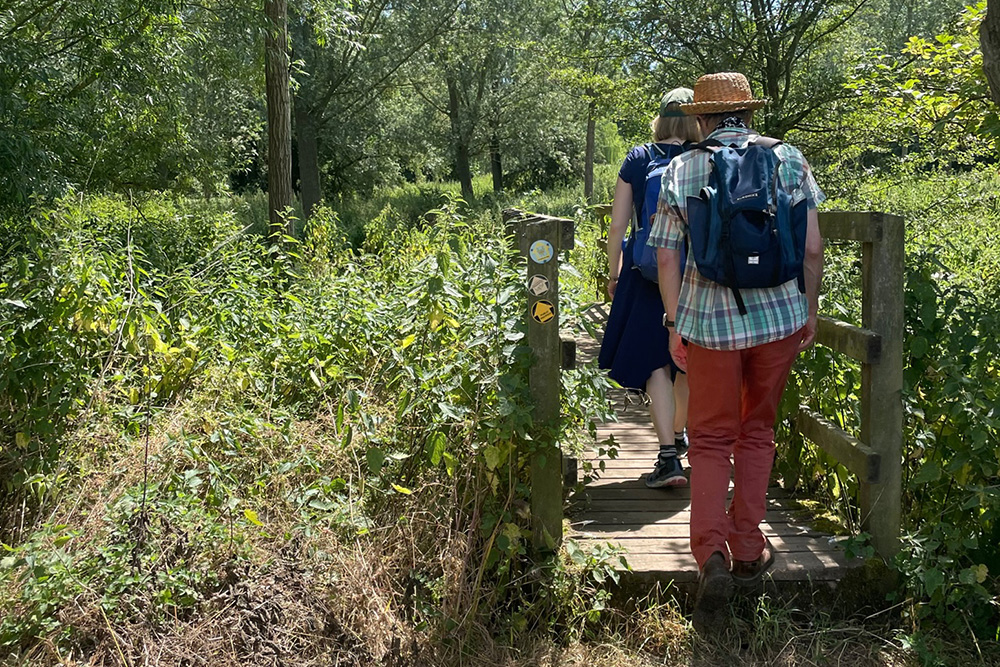 A tale of two bridges: Part One
by Andy Corrigan

When I was small there was a woodland at the bottom of our garden, its branching giants seemingly endless. I spent a lot of time perched up trees, held aloft by their seemingly timeless presence. The theme of scale is one that cropped up on all three of our walks, not least because the physical size of the mezzotint prints is very small, with most around 20cm x 25cm, in comparison to Constable’s famous “six-footers”. Albeit on an iPad, they heuristically became life-size again in virtual space.

I wonder if Constable climbed any of the trees portrayed in his pictures? Judging from those we encountered on the walks, and if we are to believe the reality of those he and David Lucas depict in the mezzotints, he certainly had the opportunity.

Not all trees are giants of course, and on Walk A, the National Trust’s ranger, David Piper, pointed out to us his favourite tree in the area – a maple that has become bonsai-like! The base of the trunk has been nibbled by rabbits and sheep, becoming gnarled, it is overshadowed by larger ash trees and so gets less light, and its proximity to the footpath makes it a tempting distraction to the younger walker with a reverberating desire to interact with, rather than solely observe, nature.

Approximately half-way along on Walk C, a mile or so West of Stratford St Mary near their confluence, our path traversed the more modest River Box before crossing the grander mainstream of the River Stour. Close enough that the immediate environment does not deviate from wooded scrubland, both footbridges are of very similar construction, and each river has similar characteristics in terms of flow, clarity and substrate. The only aspect that seemed different was that one is larger than the other. For me, this experience manifested a strange sensation, a kind of déjà vu that not only involved rewinding time by 30 seconds but having passed by a shrink ray in the process!

– The area of the crossings can be seen in the lower-right area of this aerial photograph, taken in 1971, however the bridges are obscured because the rivers are in flood.

In his 1986 book, ‘In a Grain of Sand’, photographer Andreas Feininger (b.1906-d.1999), in much the same way as Constable does in ‘English Landscape’, situates his work on the starting block of quoting a poem:

“To see a world in a grain of sand,
And a heaven in a wild flower,
Hold infinity in the palm of your hand,
And eternity in an hour.”
– ‘Auguries of Innocence’, William Blake

Feininger uses the book to deconstructs Blake’s words as a nexus to explore his passion for design by nature. The primary method he uses to achieve this is to “eliminate all indications of scale, and thereby […] turn a rock into a mountain.” (Feininger, 1986, 15)

– In this photo by Andreas Feininger, simply titled ‘Shell’, from the J. Paul Getty Museum, a group of shells in sand could be an opera house.

When specifically exploring the theme of ‘Nature in Miniature’ (published 1989), Feininger also draws me back to Michel de Certeau’s ‘Walking in the City’ that Caroline Bassett discusses in her Walking Stories blog post. He points out that the concepts of symmetry and geometry are more readily associated with the creations of humans than they are in nature, purely because they are abundantly noticeable in our urbanisation yet in nature, they are diminutive (Feininger, 1989, 66).

Scale also emerges in dialogue around the theme of Nature in Black and White, with Feininger once again comparing humanity’s urbanisation, which on a “large scale tends to be either drab or garish”, the grey concrete verses bold advertising and lighting, to the more harmonious monotonies of colour that occur in nature (Feininger, 1989, 16).

Drawing on both science and a sense of theology, Feininger theorises through his photography and words that “everything is alive, from humans, animals and plants, down to stones and atoms,” (Feininger, 1986, 22), all part of a cycle of transition regardless of the degree of animation. He asserts that some scientific knowledge permits one to contemplate how the landscape around us has formed and in doing so this adds to our potential enjoyment of it, leading to his conclusion that visual language elevates knowledge to a level where understanding becomes gratification.