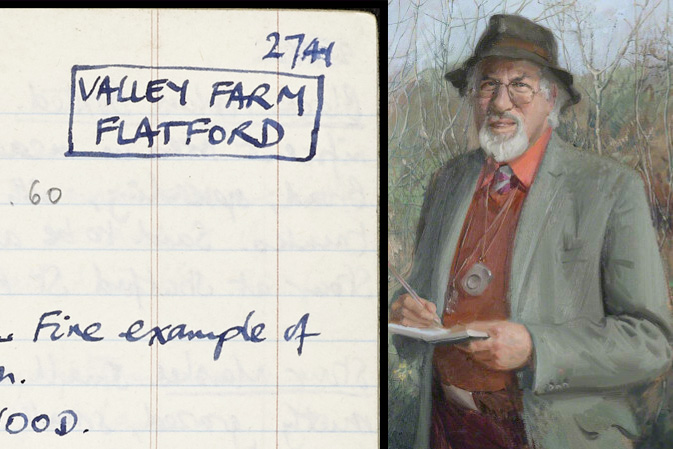 When history and science collide
by Andy Corrigan

In discussing the management of the landscape with Dave Piper as we strolled down to Flatford on Walk A, a familiar name cropped up – Oliver Rackham. At Cambridge Digital Library, we have been working on digitising and transcribing Oliver Rackham’s archive.

Oliver Rackham used scientific observation to relate current ecology to its historic and cultural context. He grew up close to Constable Country, in Bungay, Suffolk, so was familiar with the area. His studies took him on a journey from physics to botany, but he found a niche in combining his interest in nature with that in history. He wrote extensively about the history of British woodlands and landscapes.

Key to his working practice, he kept extensive notebooks recording his observations. He began doing this in his youth and continued the practice until his death in 2015.

His archive, consisting of over a thousand notebooks and also a great deal of photographic material, is now cared for in the collections of Corpus Christi College, Cambridge. Rackham was a Fellow of the college, and also served as Master for a year in 2007/8.

Oliver Rackham visited Constable Country often over his life and he had a broad interest in many aspects of the area. He often stayed in Valley Farm which is owned by the National Trust and used by the Field Studies Council.

Some of the goings-on in Constable Country that draw Rackham’s attention include:

In the virtual exhibit below, you can explore some of the observations Rackham recorded in his notebooks when he was in the area around East Bergholt and Flatford. If you want to explore the pages in more detail, you can zoom in and out and drag the images. You can also open and view Oliver Rackham in Constable Country directly in your web browser.