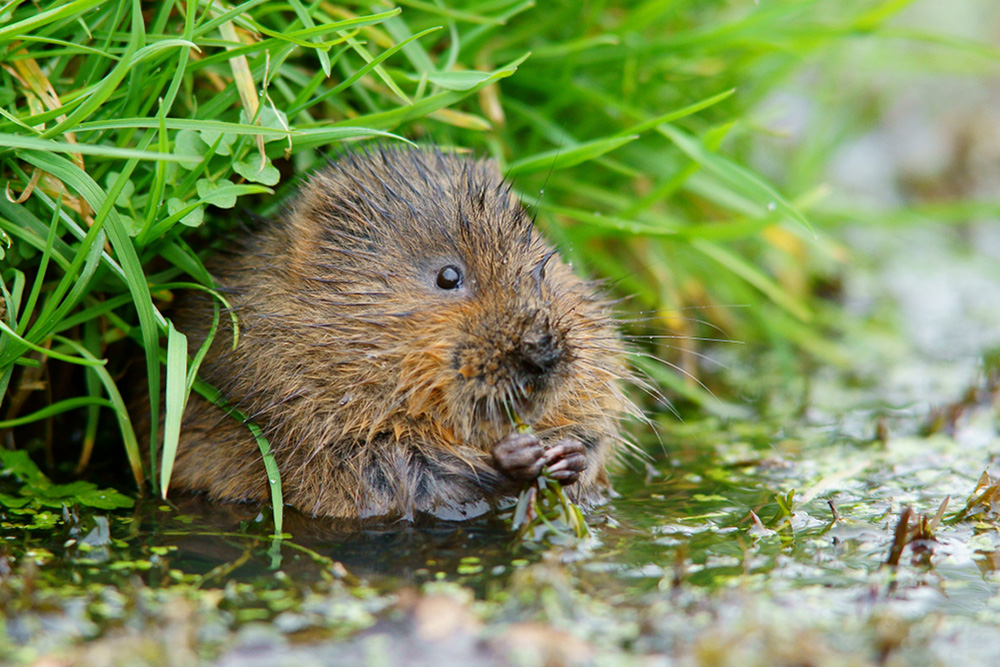 On Walk A we were joined by Dave Piper, the National Trust Countryside Manager for Essex and Suffolk. Dave has a fascinating and no doubt very demanding job, looking after everything from working farms to ancient woodlands and historic buildings. During the walk it quickly became apparent that he had an extraordinarily deep and broad understanding of the landscapes he was responsible for.

At Flatford Mill I recorded Dave talking about the traditional management of willows, oaks, and elms, conserving water voles, and identifying trees in Constable’s paintings which are still alive today. Flatford Mill is a National Trust property and is the most iconic location in Constable country. The Constable family owned the Mill and many of Constable’s best-known paintings feature scenes in the vicinity of it, including the ‘Hay Wain’.

The nearby Bridge Cottage is visible to the right of the Constable – Lucas mezzotint, ‘River Stour, Suffolk’. Dave and I were stood on the banks of the Stour looking towards the Dedham Vale, which stretches away from the viewer in the mezzotint. Around us visitors were sat at picnic benches, eagerly tucking into their cream teas, which explains some of the background noise!

Here is a transcript of the interview, you can also listen to the interview using the media player at the bottom of the page:

Dave: “So as we’re looking across to Dedham, you’ll see that there’s a lot of willow trees within the scene. And they’re actually pollarded. So they’ve been cut into a cycle so that we can get more produce out of them, which would have linked originally with basket weaving, or maybe with hedge laying, where they used it for tying in the tops and building arbors and bits and pieces. But the reason they would have actually put them into pollarded -so they’re cut eight foot off the ground- is so that they don’t drown. So that’s why you see willows growing like that along the rivers, so that they can have the tree in a rotation to be able to harvest different types of materials. And at the same time, if they did that on the ground, it would just drown the trees.”

Tom: “So you’ve got about six to eight foot of trunk, and then you’ve got the pollard on the top. So that’s why they look like that by the river?”

Dave: “Yes. Then away from the river edge, as we move back, we’ve got the oak trees, which are in a similar format, but they have a great stonking tree trunk, then you’ve got the pollarded top. And that’s eight to ten foot because oak trees are very slow growing. So it’s nothing to do with being drowned, it’s about the fact that they will get browsed by deer, rabbits and everything else. So they were harvesting the timber for faggots, for firewood, and for charcoal burning and such. So it was more for fuel woods that they were doing it for. But obviously, an oak tree is a lot more slow growing. So it needs to have that space away from its invaders; the pesky things that want to come and eat it.”

“The other big key thing down in the Dedham Vale now, the big difference we’ve got is that the elms are now missing from the views. As you take a walk up the hill, from here up to Manningtee through the one-way system, you’ll actually come across a few of the old stumps and you’re talking five foot diameter stumps that are just left. They’re all that remains of the elm trees. And when it comes to the reason why they would have been very well utilised; elm and oak were synonymous with boat building. And elm is one of those woods that’s happy being wet or dry. If it’s wet and dry timber starts to rot very quickly and it comes apart. But if it’s perpetually wet, elm and oak are very good for being used as that sort of timber. So a lot of boats used to use elm. So it’s a very good timber, but obviously, we’ve now lost it from most of our landscape. There is a lot of elm in the landscape, but they’re all very young. So they get to a diameter, they’ll grow to about six to twelve inches in diameter on the stem, maximum about twelve inches, and then you’ll see that the tree does decline, it starts dying off.”

Dave: “Nowadays, we do a lot of maintenance on the riverways where we have specialist traps, which are even connected to mobile phones now. As soon as one is triggered, you’ll know about it. So because of animal welfare, I know it’s [a pest] that you’re looking to eradicate, but if you’ve got the wrong thing, you need to get in quick, release it and let it carry on its merry way. We’ve managed to knock the mink numbers down in this area drastically, which has been great, because we’re now seeing a lot more of the water voles coming back. I’ve gone for a walk across this field, and just had water voles, sat in the ditches, looking up [makes a surprised sound] and then darting into the reeds. Then during lockdown, I had water voles swimming past my feet while I was just sat having my lunch. There were no humans apart from two of us down here.”

Dave: “A water vole is like a big fat rat. But it’s rounded. Yeah, it’s cuter looking. As soon as you see the face, you go, “yeah that’s not a rat”. That’s definitely a water vole. But you’ll see the evidence of them in a lot of areas where you’ll see a lot of holes in the banks within the reeds. And when you’re walking along, that’s when often you’ll hear a little “plop!” sound. So if you’re walking down the trail on the river and it’s very quiet, and there’s lots of grasses and all of a sudden you hear a “plop!” in the reeds, then it might well be a water vole that’s dropped in.”

Tom: “Were you saying earlier on that in some of the Constable views around here. You can identify young trees in the paintings that are now mature trees?”

Dave: “Yes. So we’ve got one of the paintings on the hill on the way out. And we did a bit of research and we found from studying old maps where the hedge lines used to be, and the fact it was on a crossroads meant that when we actually went and looked at the map and we saw the crossroads and we could see where the tree was. And then you look there now and where that crossroads should be there is this nice big mature tree. So something Constable painted as a fifteen foot tall scraggly little tree is now a nice mature specimen of an ash tree or an oak.”