Home / Blog / Of Constable-bows and rainbows 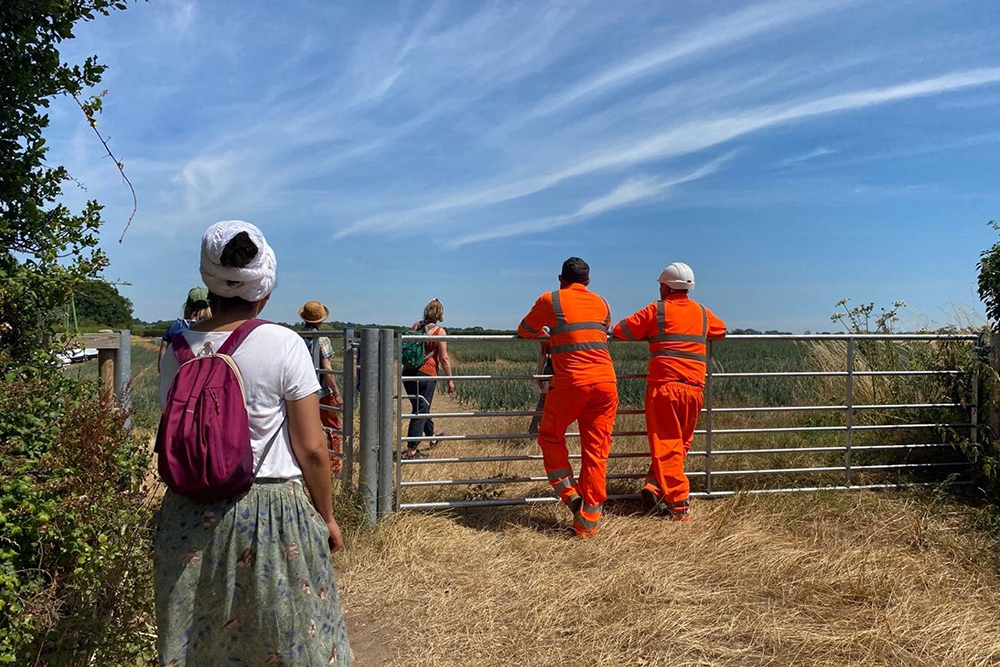 Looking for the first time at the ‘English Landscape Scenery’ print portfolio by John Constable and David Lucas, I was struck by the intermedial and dramatic effects of the prints. Sections of these mezzotints have the quality of a photograph, yellowed over time: a photorealistic streak countered only by the dotted texture exposed in other parts. This network of tiny dots (see Elenor Ling’s post on Constable’s printed landscapes) not only anticipates pointillism – a painterly technique developed by Georges Seurat and Paul Signac in 1886 – but suggests pixelated digital artwork, and therefore an awareness of artistic mediation. CryptoPunk NFTs, a collection of algorithmically generated pixel-art characters that recently went viral, are probably at the extreme end of this dotted spectrum.

By contrast, the velvety tones of the mezzotint prints create the illusion of painted brushstrokes in other sections of the prints. This versatility of Constable’s printed landscapes – alternating between photography, pixel, print and painting – reanimates and remediates his trees, cloud formations, people, and land. In so doing, it enthrals and absorbs the viewer. And yet it was only when I began walking with Constable that I started to grasp this quality of intermedial playfulness and ‘liveness’.

Walking among fellow walkers and local experts on Walk C, I stepped into the landscape that inspired Lucas’s and Constable’s ‘Stoke-by-Nayland, Suffolk’ 1829 mezzotint nearly two hundred years ago. The print shows a village church that is arched over by a rainbow at noon and surrounded by some dwellings. The top half of the composition is dominated by thundercloud formations and trees that are competing for the attention of the viewer whilst the bottom half extends in an agricultural landscape with people working the land.

Unsurprisingly, the man-made landscape has shifted considerably between Constable’s time and the summer’s day in July 2022 on which we started our walk. However, some buildings – notably, the alms house where we stopped to compare the views between print and physical landscape, were already in place in Constable’s time (so we were informed by local archaeologist and fellow walker, Angus Wainwright). Walking at noon, on one of the hottest days of the year, the temperature no doubt exceeded that depicted in the print. I found myself in a scorching heat that Constable might have welcomed. He sought the ‘solemn stillness of Nature in a Summer’s Noon, when attended by thunder-clouds’, so he noted in the description accompanying the ‘Nayland’ print.

The deep blue sky of our visit explains why the discussion turned towards the ‘impossible position’ of the church, as noted by fellow walker and writer Mathelinda Nabugodi. Constable has brought forward and reversed the church for the print, apparently so that the rainbow can light the church and heighten the contrast between light and shade (chiaroscuro). In this way, the dramatically lit church tower in the print beckoned us into Constable’s imaginary world. Walking with him clearly wasn’t about recreating and re-enacting the scenography of his printed landscape: as we have seen, Constable’s own composition neglects a realistic representation of the landscape in favour of other effects. What we experience instead is a sublime drama and vitality; and, crucially, a sense of where the scenery places us, the viewer.

Walking with Constable draws me into a set of questions that concern what I am calling here “digital liveness”. How, in other words, are visual cultures – such as Constable’s printed landscapes – reconfigured when they are augmented through physical environments and digital technology?

Performance scholar Philip Auslander argues that digital liveness is an interaction or a specific relation between us and the object; in our case we are involved in a relationship with an artwork, as well as a virtual copy of it, and the land that inspired it. Auslander bases his argument on Hans-Georg Gadamer’s proposition that a work of art makes a claim upon us. This means that we set up a relationship with the object or virtual entity by accepting its claim to liveness or its demand of full presence ‘as binding upon us, take it seriously, and hold onto the object in our consciousness of it in such a way that it becomes live for us.’ (Auslander, 2012, 9). Effectively – and returning to my slow walking in the heat of this summer’s noon – digital liveness asks for a performative pact and shares some sweat with the walker.

We stopped at a mound by the alms house in Stoke-by-Nayland to overlay an augmented copy of the ‘Nayland’ print onto the surrounding landscape. The church tower was glaring at us from a distance, waiting to be augmented by a virtual landscape. 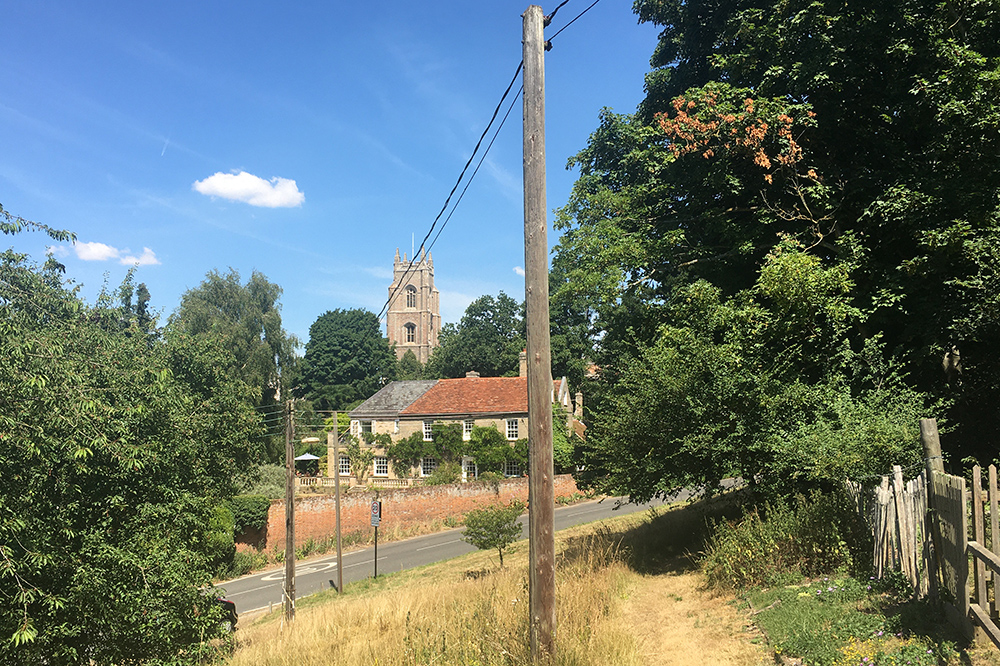 – View of St Mary Church in Stoke-by-Nayland from the alms house on 11 July 2022, picture by Mathelinda Nabugodi.

At first, augmenting the deep blue sky with a rainbow in velvet (similar to a moonbow that is usually perceived as white) seemed surreal, not least because Constable highlighted in his notes that a Noonday-bow, known for its low and flat appearance, cannot appear in Summer, ‘after the sun has passed a certain altitude’. Constable concluded in his notes on the ‘Nayland’ plate: a low bow ‘is best seen “Smiling in a Winter’s day”’.

The impossibility of Constable’s rainbows has been the source of heated debates by curators and art historians (see, for instance, Anne Lyles on sublime nature and John E. Thornes on Constable’s Salisbury rainbow), not least because Constable had a solid knowledge of contemporary rainbow theory. According to Thornes the rainbow has a symbolic function in some of Constable’s work. He argues, for instance, that the rainbow in Constable’s summer scene ‘Salisbury Cathedral’ in the Meadows (exhibited in 1831) was a later addition to commemorate the exact time of the death of his friend John Fisher on 25 August 1832.

Why then did Constable use a rainbow that couldn’t factually have appeared under the meteorological conditions seen in the ‘Nayland’ print? Is it possible that Constable intentionally acted against his considerable rainbow knowledge? There may well be plausible theories out there that I don’t know of. The ‘Nayland’ rainbow might mark the time of a significant autobiographical event in Constable’s life. The 20 degrees angle of the rainbow in the ‘Nayland’ mezzotint, as explained by Thornes, seems to point to a date in late January. In addition, the mezzotint only shows a section of the rainbow. Constable’s composition leaves open exactly where the low bow rests and peaks. However, for the walker on a summer’s noon, who has superimposed an impossible (virtual) Nayland rainbow onto today’s scenery, as Constable did onto his imagined landscape, this Constable-bow holds a performative promise.

Like the Salisbury rainbow, the Nayland rainbow was a later addition to the ‘Stoke-by-Nayland’ scenery. It is missing in most of Constable’s earlier ‘Nayland’ sketches (1810-30) and in the later unfinished ‘Nayland’ painting (1836). His notes on the ‘Nayland’ plate show that he knew about the impossibility of a noonday-bow in England on a summer’s day. After walking through the printed landscape by using augmented reality, I see that it was for good reason that he reserved his artistic licence for the mezzotint print. Of rainbows, Constable notes: ‘when this phenomenon appears under unusual circumstances it excites a more lively interest’.

– ‘Stoke-by-Nayland’, John Constable, 1836, from the collections of the Art Institute of Chicago

The subtle medial shifts of the ‘Nayland’ mezzotint immensely benefit from the augmenting zoom effect of the rainbow. From my viewpoint, Constable used his artistic licence to augment the position of the viewer in the ‘Nayland’ scenery. If he understood his paintings as scientific experiments, primarily interested in cloud formations and the solar geometry of the rainbow, walking with Constable illuminates how the ‘Nayland’ print is set up as a dramatic experiment. The rainbow firmly positions the walker in relation to the printed landscape.

It was only when I walked the physical landscape and looked through the digital lens of a tablet that I started to participate in the visual drama of the ‘Nayland’ mezzotint. In the latter, the rainbow expands the Nayland scenery into three dimensions. Its ‘mild arch of promise’ – here I am quoting the poet Robert Southey’s words as Constable did in his notes – firmly positioned me in a specific relation to the church, the trees and the people working on the land. The geometry of a rainbow helps to determine distance in a landscape. In this way, it made me realise that augmentation is a principle inherent to the Nayland scenery in the print.

In relation to me, for instance, the illuminated figure working on the fields at the back left seems blown up and out of proportion. The augmented worker helped me see that the centre of the arch of the rainbow does not point to the church and its symbolism but is located closer to the people working the land. As I looked at the Nayland rainbow through the digital lens of a tablet (not lens-shaped rain drops), the Constable-bow created digital liveness. It expanded and merged my physical body with the viewer Constable had imagined and the virtual viewer implied in the augmented print. In this way, the Nayland rainbows, augmented and analogue, made a claim to liveness and full presence. They interweaved the physical, the digital, and the imaginary, by making the ‘solemn stillness of Nature in a summer’s Noon’ grow alive across different media with a ‘diffusive tremble’*… just before, that is, the thunderclouds and lightning strikes claim their due.

– As we turn around a bend, we are presented with two construction workers, who look onto Constable Country, augmented through their dazzling protective gear, picture by Caroline Bassett.