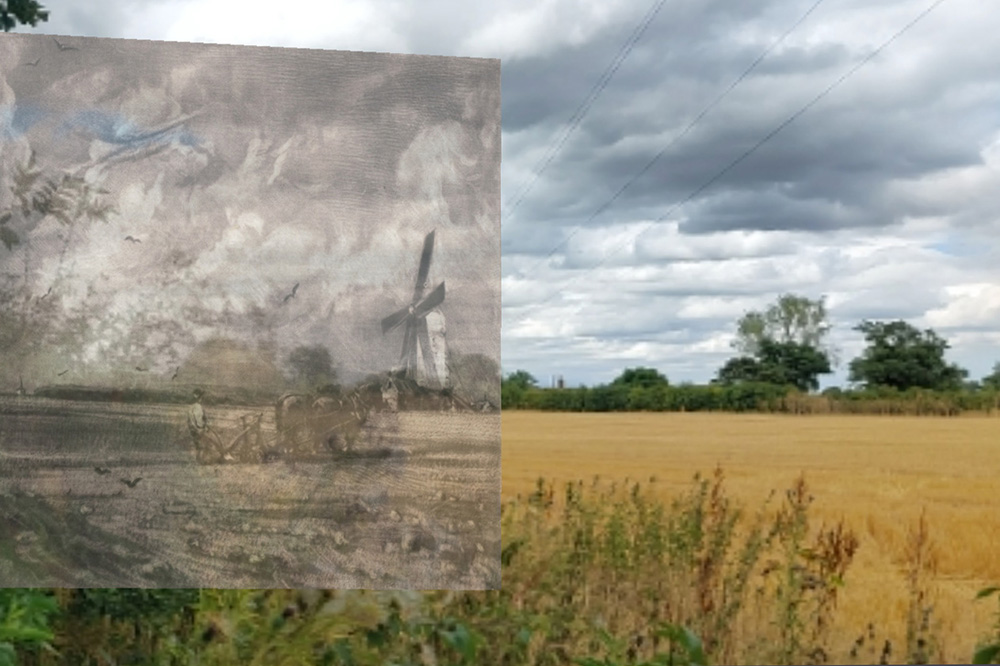 A Meteorologist Talks Constable and Skies
by Tom Crowley

Windmills and watermills were the Constable family trade. As a young man John Constable was set to work at a windmill on East Bergholt common, near to his childhood home. There he learnt to read the skies: an essential part of the windmiller’s skillset.

Later, Constable returned to the windmill, recording it in a painting which was reproduced by David Lucas as the mezzotint ‘Spring’. Constable wrote an accompanying text for ‘Spring’ which reveals his understanding of clouds and what they can portend:

“[…] at noon large garish clouds, surcharged with hail or sleet, sweep with their broad cool shadows the fields, woods, and hills; and by the contrast of their depths and bloom enhance the value of the vivid greens and yellows, so peculiar to this season.

The natural history—if the expression may be used—of the skies above alluded to, which are so particularly marked in the hail squalls at this time of the year, is this:—the clouds accumulate in very large and dense masses, and from their loftiness seem to move but slowly: immediately upon these large clouds appear numerous opaque patches, which, however, are only small clouds passing rapidly before them, and consisting of isolated pieces, detached probably from the larger cloud. These floating much nearer the earth, may perhaps fall in with a stronger current of wind, which as well as their comparative lightness, causes them to move with greater rapidity; hence they are called by winder-millers and sailors ‘messengers,’ being always the forerunners of bad weather”

On Walk A we were joined by John Thornes, a meteorologist who has been disseminating his research on Constable’s relationship with the skies who for over forty years. At the site of the windmill depicted in ‘Spring’ we looked at the mezzotint and John talked me through what was happening weather-wise.

John: “So this is springtime, and the ground is warming up, so you are getting some big cloud formations: cumulonimbus. A thunderstorm is developing, and the idea is that hail is falling from the cloud, it’s not that easy to see but it’s around here.”

Tom: “Just in the middle of the left side of the picture?”

John: “Yeah, that’s right. So you’ve got a very heavy hail shower, which is passing across, driven by the wind. So the windmiller is fearful that the wind might well destroy his windmill, so he has to put the breaks on as it were, to stop the windmill rotating and turn it away from the prevailing wind. He would need to turn the windmill, so it is at right-angles to the wind. It’s a fantastic sky, you can feel the movement and the fear of the hailstorm.” 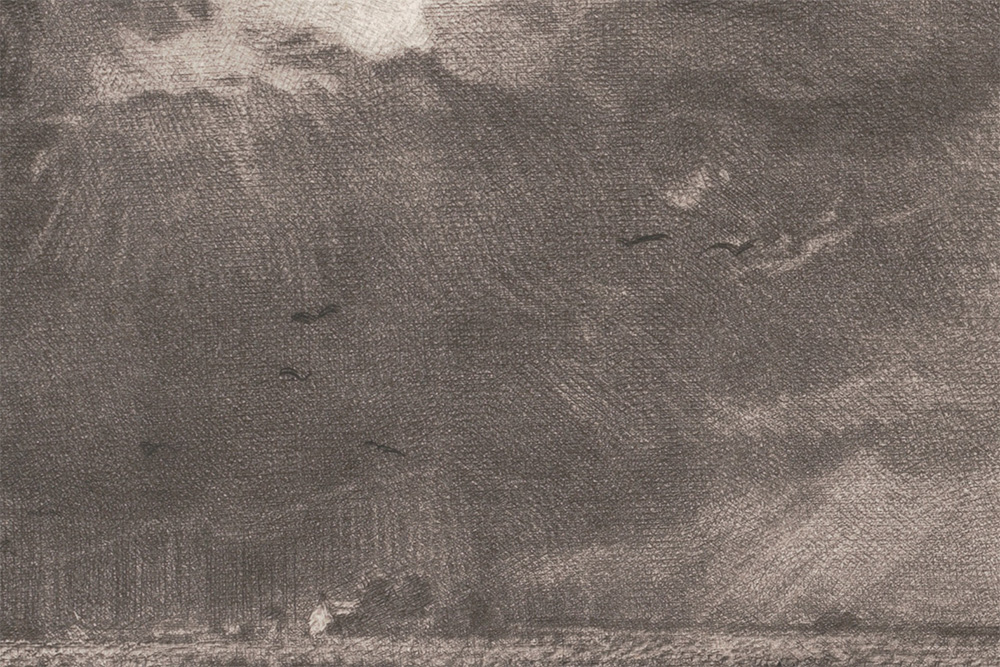 Detail of ‘Spring’, showing where Lucas, under instruction from Constable, has suggested hail showers.

We also discussed the accompanying text for ‘Spring’.

John: “He calls them ‘messenger clouds’, clouds that say that thunderstorms are on their way. So they are the dark clouds that appear below thunderstorms and that’s what the millers are looking out for. If the thunderstorm is heading away from you then you can still keep the mill going, but if it’s heading towards you then you have to act. Winds move in different directions at different levels in the sky. Thunderstorms are huge three-dimensional structures, and the lower winds are not necessarily telling you which way the thunderstorm is going to move, so you have to look out for these harbinger clouds.”

Tom: “Would they take the sails in, or kind of trim them a bit on the windmills? What was their system of dealing with worse weather?”

John: “The worst thing was if you left the sails spinning. It could set the mill on fire because it could spin so fast. You had to secure it, you had to put the breaks on to stop it going round at all and you had to turn it away from the prevailing wind. It was quite a lot of work, so you didn’t want to do it if you didn’t have to.”

Tom: “In ‘Spring’ Constable talks about clouds ‘floating’, but that’s not accurate?”

John: “Yes, in those days the question was, why don’t clouds just fall from the sky? Since water is so much heavier than air, it’s something like 800 times denser than air. So they invented the idea that clouds are made up of what they called ‘particular droplets’, which were water droplets with a vacuum inside that float in the air. That was the only way they could explain it. But in reality, cloud droplets are actually falling all the time, but at a very slow rate. Due to convection however, there are also new droplets being formed, so there is a sort of balance going on. So it’s nothing to do with particular droplets.”

John: laughs “Yeah it was.”