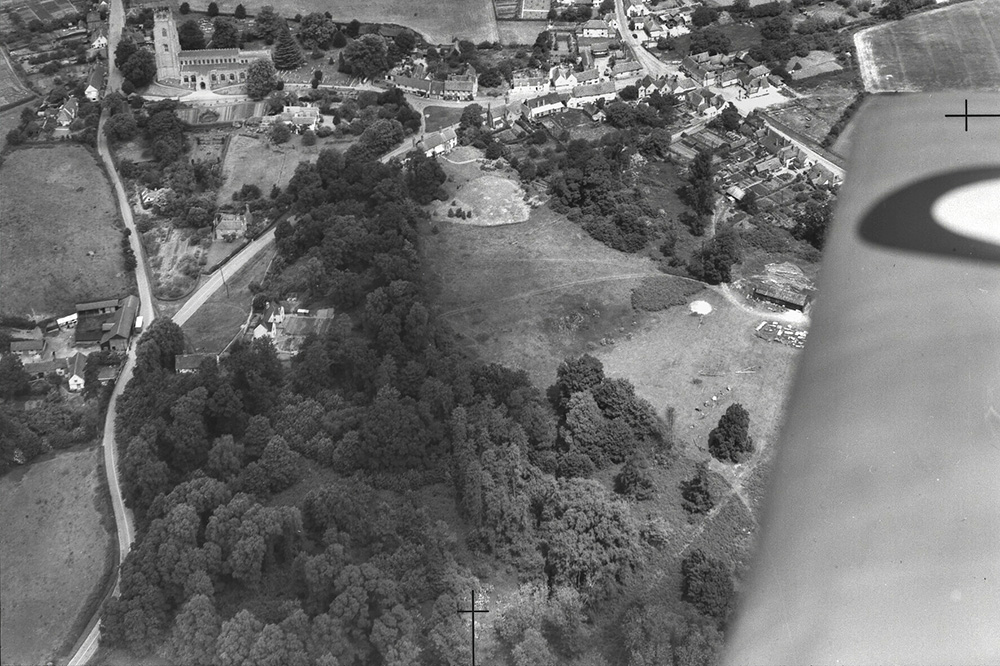 A bird's-eye view of Constable's landscape
by Andy Corrigan

Beyond Constable’s own work, there are a variety of other primary sources that can help us understand the landscape in which he worked. One of those is Cambridge University’s Collection of Aerial Photographs (CUCAP); a large and diverse collection that allows us to view the landscape from a different physical perspective that neither Constable nor ourselves, without the use of specialist equipment, could achieve. Here is a brief look at the background to CUCAP and how some of the images in it might help us.

CUCAP is the result of airborne survey campaigns which were started in 1947 by the pioneering Roman archaeologist J.K. St Joseph. Since then, the collection has grown to almost 500,000 images of obliques and verticals in black and white, colour and infra-red. Virtually the whole of Britain has been covered, with the obliques depicting a wide variety of landscapes and features and the verticals being of survey quality, can be used in mapping projects.

“Much of the imagery in the collection is remarkable, of great technical interest, and of high academic value, including as it does records of coastal change, discoveries of archaeological sites and the pre-and post-industrial landscapes of Britain.”

A full database of the collection is available on the CUCAP website and a pilot project digitised c.1,500 of the images at high-resolution and incorporated them into Cambridge Digital Library at the beginning of 2019.

Focusing in on the area around the River Stour and Dedham Vale AONB, the landscape of Constable’s upbringing, we have identified several interesting aerial photographs in CUCAP relevant to the scenes depicted by Constable. These 23 images were all photographed between 1951 and 1989, are all black and white, instantly providing us with a visual association with the mezzotint prints that David Lucas created with Constable.

Some of the vertical aerial shots originated from surveying farms in the area, others record oblique views of a landscape covered with archaeological cropmarks or focusing on one of the natural forces that shapes the landscape – water. One thing they have in common is that they all provide us with a perspective of the landscape that we would be unable to achieve without specialist equipment.

In the most obvious sense, these aerial photographs are a record of a landscape in a single moment in time, allowing us to question what has changed since Constable created his artworks. Or indeed, when we are out in the field, what might have changed since they themselves were taken. But when we look closer, we can also see a record of a past that predates Constable, that he himself would have been unaware of – that criss-crossing tangle of tantalising archaeological cropmarks almost binding the landscape and inviting us to unwrap its story.

The visual information we can see recorded by aerial photography is also dependant on light and weather conditions – two more of Constable’s chief interests. Different features in the landscape are revealed by the direction and angle of the sunlight illuminating the scene. The visibility of cropmarks, also dependant on this factor, is also affected by seasonal weather conditions, with the effects of moisture retention in the ground and subsequent plant growth all having an impact on visibility.

You can explore the aerial photographs via the map below, which shows their locations, or on Cambridge Digital Library.