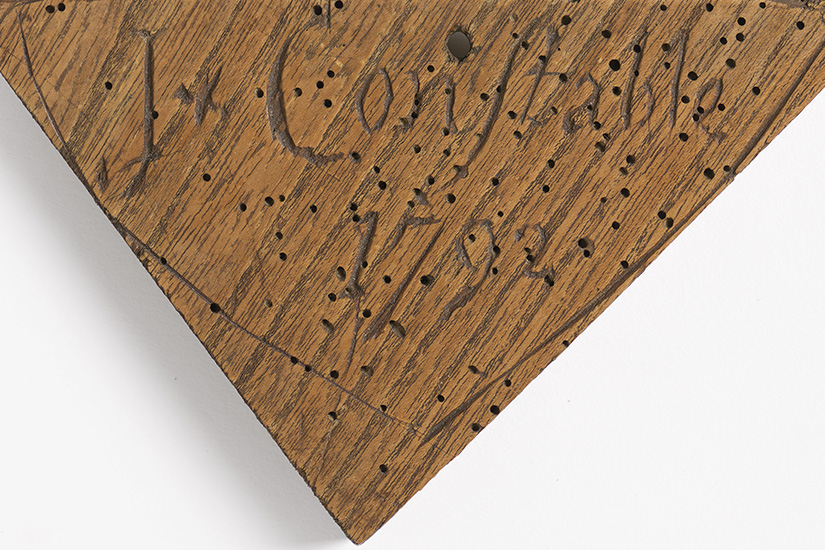 Christchurch Mansion in Ipswich, Suffolk, is home to a significant collection of Constable’s work that has been collected since the 1890s. It is the only place in Constable’s home region where his art can be seen alongside the Suffolk people he knew, worked with and inspired. It is a collection that clearly tells the story of Constable’s foundation years as an artist and contains one of his earliest artworks of an incised image of his father’s post mill completed at the age of 16. 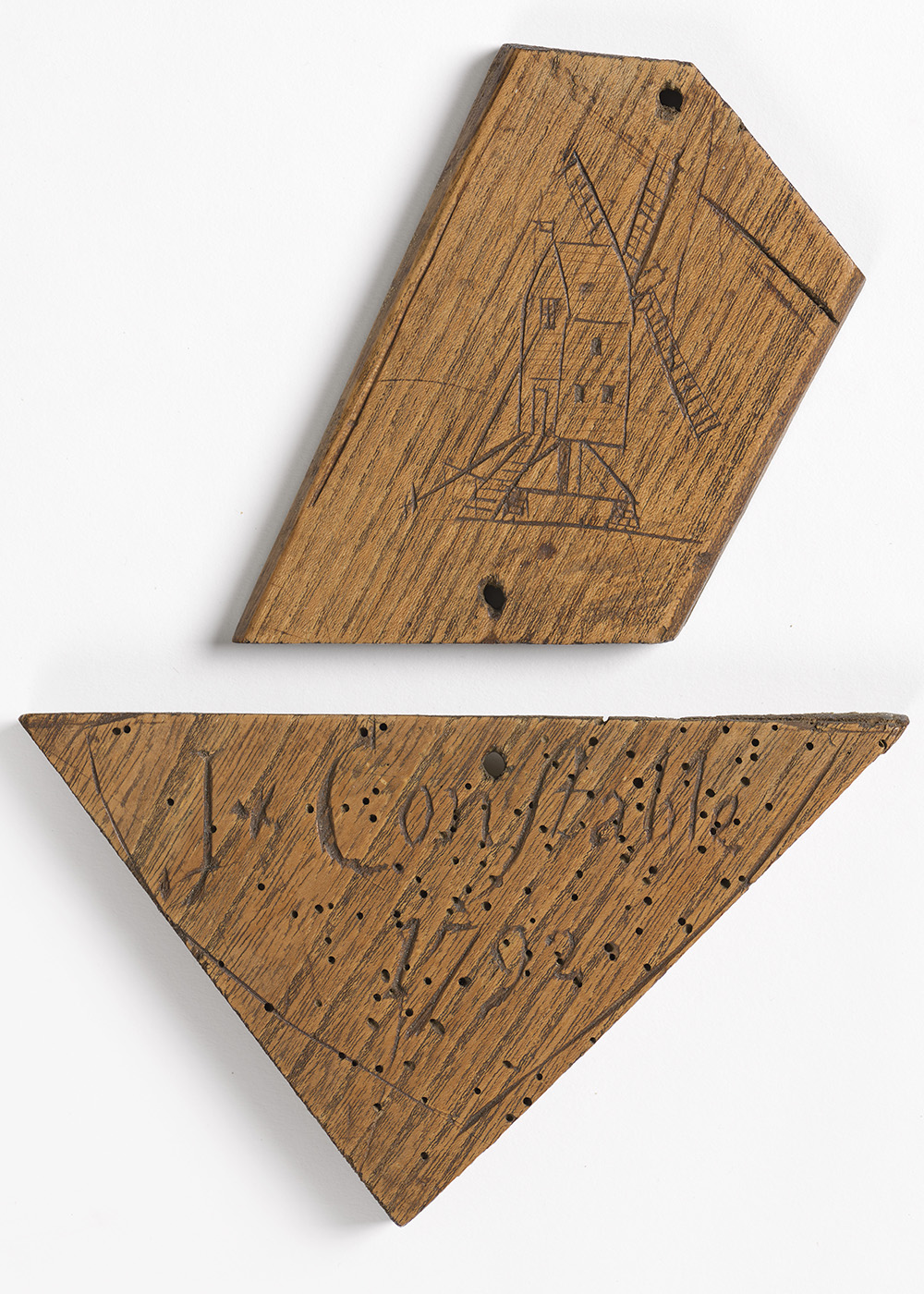 – Constable carved his name and the image of Pitt’s Mill into a timber of the mill he was supposed to be working in at the age of 16, 1792 (COLEM : 136A ©Colchester and Ipswich Museums Service: Colchester Borough Council)

As Curator of the Constable collection, I joined the last two miles of the walk from Stoke-by-Nayland to East Bergholt. Meeting the group at Stratford St Mary Church on a sunny Monday, was a good opportunity to reflect on Constable’s connections with that village. It was a place he was very familiar with, as a staging post for the coaches running to and from London and the local paper mill would feature in the monumental painting of ‘Stratford Mill’/The Young Waltonians, 1820.

In the churchyard of St Mary Church can be found the grave of Reverend Narcissus Charles Proby (1738–1804), rector of the church, whose daughter and grandson Constable would paint in 1804. These early portrait commissions often came about through the Constable family network of friends, family and church. The portraits were a way to prove to Constable’s parents that he could make a living as an artist.

In Ipswich one of these early portrait commissions has recently been shown to depict a view of Stratford St Mary Church. A group portrait of four young women, that had been entitled ‘Ladies of the Mason Family’, was thought to depict the daughters of William Mason, Colchester relatives of the Constable family. Research undertaken by descendants of the original owner of the painting, Thomas Mason, found that there was no link to William Mason, who only had one daughter. Instead, the sitters in the portrait are the Cooper sisters of Woodhouse Farm, Dedham Road, Stratford St Mary. The painting had been left to Thomas Mason by his great aunt Mrs Simpson, whose maiden name was Hannah Cooper (1792–1862). Hannah was born in Stratford St Mary and was the youngest daughter of William Beaumont Cooper (1753–1812) and Elizabeth Cooper (née Green, 1763–1828). Hannah had three sisters Elizabeth (1783–1856), Ann (1784–1831) and Bridget (1786– 1845) and the ages of the girls in 1803/4, when Constable was at the peak of painting ‘local portraits’ fits the scene. Through the window can be glimpsed Stratford St. Mary Church and it matches with a view that can be seen from Woodhouse Farm today. 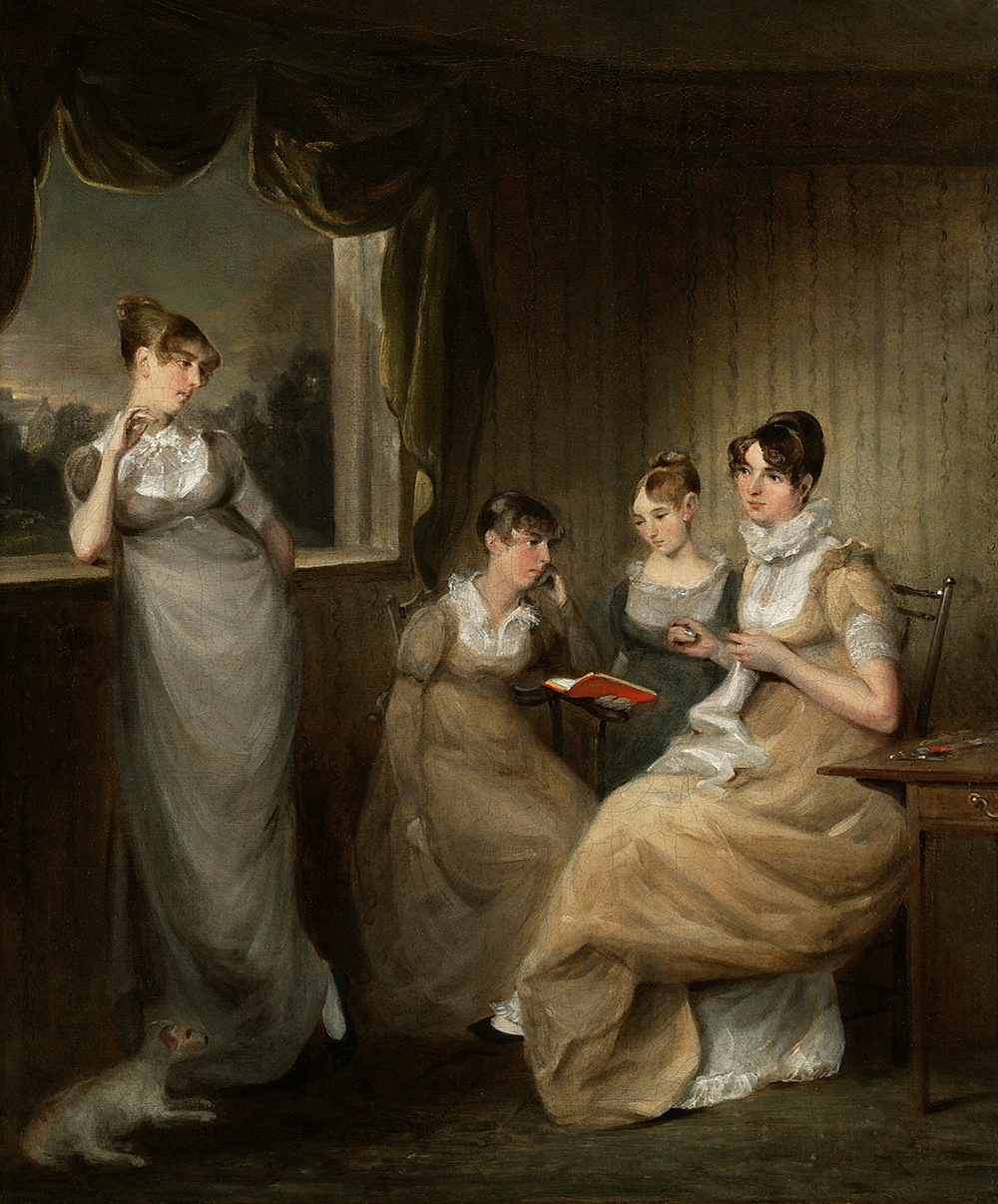 – Group portrait of the Cooper Sisters, John Constable, c.1803-6 Oil on canvas IPSMG.R.2002.48 Acquired with the assistance of the Heritage Lottery Fund and the Friends of Ipswich Museums ©Colchester and Ipswich Museums Service: Ipswich Borough Council

The painting is currently on display in ‘Recreating Constable’ an exhibition at Christchurch Mansion, Wolsey Art Gallery, until 25th September 2022. It follows on from the popular ‘Creating Constable’ exhibition, which focused on Constable’s early career and marked 200 years of ‘The Hay Wain’ in 2021. The Wolsey Art Gallery will then be closed until our next exhibition opens on 22nd October 2022 ‘Landscape Rebels’: Turner, Constable, Monet, Hambling and the climate crisis.

If you would like to find out more about the Constable collection from Colchester and Ipswich a new publication details the history and can be obtained from Christchurch Mansion. “Ipswich History: Creating Constable”