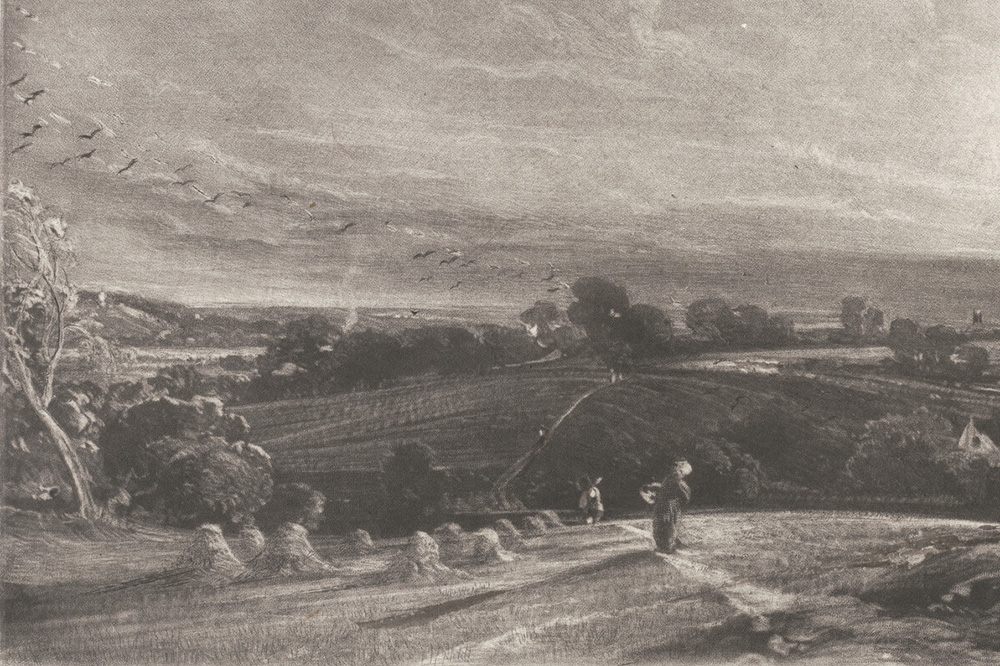 On 14 November 1832 Constable wrote in a letter to David Lucas:

‘In the coach yesterday coming from Suffolk, were two gentlemen and myself all strangers to each other. In passing through the valley about Dedham, one of them remarked to me - on my saying it was beautiful - ‘yes sir - this is Constable’s Country!’ I then told him who I was lest he should spoil it.’

John Constable was born and brought up in the town East Bergholt, on the Suffolk-Essex border. His father, Golding Constable, was a land-owning farmer, miller and merchant who owned land at Flatford, and later a mill in East Bergholt and another in Dedham. A time traveller to Golding’s generation, who was posed the question, ‘What is Constable country?’ would have been shown a stretch of East Anglian land not dissimilar to that which was later associated with his son John.

The Constable name, or Constable & Co., was deeply rooted with the Stour Valley soil and their name flowed down the waterways to Mark Lane, London. John’s ancestors were a mixture of landowners, tanners, and millers from nearer Sudbury in Suffolk. What came to anchor the Constables further south-east, in Flatford, was the bequest of Abram Constable, Golding’s uncle, who died childless. Golding was a shrewd businessman: through partnerships his name grew familiar in Dedham, and further west to Bures on the far west side of Dedham Vale.

As a child, John’s becoming one of the country’s most celebrated artists was the last thing anyone in or close to the family expected. As the second son, his career was initially destined within the church, and then when his other brother’s debilitating condition (probably epilepsy) worsened, John’s path was diverted to learn the Constable business. In this new apprenticeship, John cultivated a deep, forensic local knowledge of this area. He learned how barges operated on the canals, about towpaths, sluices and locks. He mastered the weather, learned how to read clouds as ‘messengers’ of change. He was on the ground, in the landscape, under the open sky, and it was during this time that he began to draw and paint what his forensic eye could see from the fields and footpaths.

For a serious artist, as Constable later became, this was more unorthodox and shocking than now might be assumed. For a long time, the only landscape that had been deemed worthy of attention of the best painters was abroad, in Italy or Switzerland. Constable faced considerable prejudice amongst his peers that native scenery was worthy of attention.

Not only did Constable say that original work necessitated close study of nature (imitative work could be easily learned - an artist had no right to call themselves a landscape painter if they did not study it directly), he also vociferously argued that landscape painting was capable of embodying moral values, of invoking sentiment; it could act as a vehicle for ideas and emotions as well as any painting of classical or mythological subjects. The Constable country of his childhood, of boat-building, milling and working the land, became a driver for a new way of seeing and looking at art.